February 1 – 4, 2016 – During the Washington Capitals Military Night, items were auctioned off with proceeds going to USO-Metro and United Heroes League.

Paxton Companies is partnering with the Capitals to support military families who actively participate with United Heroes League, the Washington Capitals announced. Through the partnership, Paxton Companies will provide unique experiences TO UNITED HEROES LEAGUE families at 20 Capitals home games. Families will receive tickets to the game and participate in a postgame meet and greet with Capitals players.

“As a company founded by a WWII veteran, we are both honored and excited for the opportunity to support the men and women that give so much for our freedom,” said Bill Paxton, COO of Paxton Companies. “United Heroes League has found a unique way to show appreciation for the sacrifices of members of the military and their families and Paxton is proud to partner with United Heroes League and the Washington Capitals.”

The Paxton Companies are a fourth-generation family business based in Washington D.C. Paxton has provided premier certified Moving and Storage services to the world since 1947. Paxton handles global and domestic moving and storage, international imports, exports, shipping of personal effects and commodities, warehousing and logistics, office and industrial moving, and records management. Supported by their extensive worldwide network, state of the art facilities, and knowledgeable staff, Paxton provides service to relocating families, corporations, governments and the military.

“We’re excited to have an emerging partnership with Paxton Companies, and the continued support of the Washington Capitals organization,” said Shane Hudella, president and founder of United Heroes League. “Both are world class organizations that we hold in high regard. Their generous gift this season will provide a unique opportunity for local military families to attend a Washington Capitals home game free of charge as a thank you for their service to our nation, and we are very grateful.” 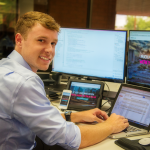